Cruising to Havana: Sailing into Havana.

Robbie and I had a great day in Key West seeing the sights. Departing before sunset we had some time to enjoy the ship. We had a nice dinner and took in the evening show. When you are cruising there is no shortage of food or entertainment options. We were scheduled to arrive in Havana early the next morning.

After breakfast, we were up on deck early, along with most of the other passengers, to get a first glimpse of Havana as we approached the port. Castillo De Los Tres Reyes Del Morro is a beautiful stone Spanish fort that has guarded the port for many centuries. Castillo Del Morro is an impressive sight as you enter the harbor. The massive statue of Jesus, El Cristo de La Habanna, overlooks the the port keeping watch over everyone coming and going. From the other side of the ship we get a good view of Old Havana. The dome of the old capital is visible in the distance. Sailing into Havana is quite an experience.

We like to explore a port on our own as much as possible. Sometimes though the places you want to see are too far from the port. Maybe a guided tour is a better option. There may be some other reasons why purchasing a shore excursion may be the better option. Havana is a great port to explore on your own. The port of Havana is right in old town Havana. All of old town is within walking distance. Unfortunately, due to US/Cuba relations, there are regulations about visiting Cuba. When we first started to plan our trip to Cuba you needed to do what was called a person to person tour. Meaning you needed to do a guided tour that had some sort of cultural exchange. After that you were able to do some exploring on your own. As our cruise approached, we elected a new president that changed the rules. The new rules went into effect just before our cruise. Now we were required to be part of a tour the whole time. We were no longer able to do any exploring on our own. I wanted to do a tour of Havana in one of the old classic cars. The old classic car tour from the cruise line was rather expensive. We could have hired an old classic car tour on our own for half the price.  The regulations being shiny and new; the cruise line was unsure about how to handle them. I wasn’t sure if we would be allowed off of the ship unless we were part of a shore excursion. So we booked shore excursions for both days.

Update on Cuba. This is a multiple part post that I have been working on for a few weeks. As I finished writing about our first day in Havana, we learned of a US ban on travel to Cuba. This is very sad, we really enjoyed our trip to Havana. We were looking forward to going back and seeing more of Cuba. I not only wanted to share our experiences, I also wanted to inspire readers to visit Cuba. Sadly, posts like these may be the only way that any of us will be able to visit Cuba in the future.

No matter the port, the shore excursion procedure is about the same. We all gather in the big show room at a scheduled time in groups according to your particular excursion. Each group is dismissed in turn, so everyone is not trying to exit the ship at the same time. There is usually still quite the queue, since excursions were required, this was a longer one. Cuba being a mystery, I wasn’t quite sure what to expect when we went through customs. As it turned out it was no different than any other country. The cruise terminal is on the dock and is pretty big and long. After going through customs there are some shops selling cigars, rum, and all sorts of things. You can’t get Cuban currency in the states, and that’s something we needed. At the end of the building there is a money exchange. Its just like going to a bank, you go to the next available teller, give the teller US and they give you Cuban, easy! The whole process is rather easy and stress free. Cuban money in hand we went down to the ground level to rejoin our excursion group.

Walking out of the cruise terminal into the street, seeing Havana for the first time, is hard to describe. The buildings are old, the cars are old, it’s like no other place I have been before. Havana has a pulse or a vibe that you feel right away. We were looking forward to seeing the rest of the city. 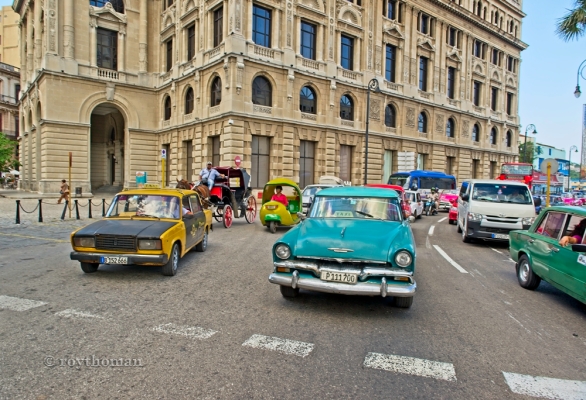