Authors note: We took this trip in Oct./Nov. of 2019. I took a gazillion photos. It takes me a long time to sort and edit my photos. My plan was to write most of the posts about this trip before I started to post them. I am not the fastest writer by any means. It’s surprising how long it takes to write 500 or so words when you choose your words carefully. So I knew from the beginning that it was going to take me a while to start posting about this trip. Anyway, I’m ready to start posting and BAMM!! We find our self in the middle of a global pandemic! Cruise ships are stranded at sea and people are dying onboard! That sort of took the wind out of my sails. I didn’t think this was an appropriate time to start posting about a wonderful cruise. So I shelved my cruise posts. Time flies when you’re not having fun. It’s now been a year since we departed on our trip. What a year its been! I’m not sure what the future holds for the travel industry. I was hoping to be traveling again in the spring of 2021. Now it may be longer and even longer yet for the cruise industry. For now I hope that you will enjoy reading about our Italian, Aegean Sea cruise. 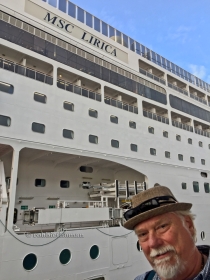 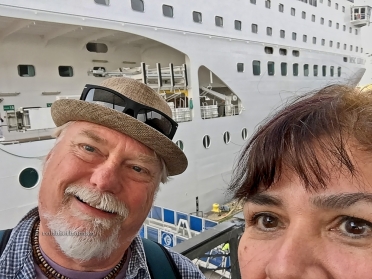 It’s boarding the ship day! We had our bags all packed and ready to go. We checked out of the Ca della Corte. We really enjoyed our stay there; we didn’t want to leave. The cruise port is very easy to get to, at least for now. There has been a big push to move the cruise port out of Venice. The B&B was a short walk from Piazzale Roma. For a small fee, we could have had someone take our bags on a cart. But we just rolled them to Piazzale Roma from there we took the people mover to the port. The people mover is an elevated tram that takes you from Piazzale Roma to the port. We purchased tickets from a kiosk for 1.50€ each. You swipe your ticket and the gate opens. Robbie swiped and went through. I was rolling our two large bags. I swiped and got the first bag through and the gate closed! So I needed to push the second bag under the gate and then crawl under the gate myself. Well that was fun! It was a short ride to the port. If you are interested in the boarding process keep reading. It was quite the adventure. Otherwise feel free to stop here.

We were sailing on the MSC Lirica. MSC had a shuttle bus to take us from the people mover to the terminal. At the terminal we waited in our first line, to check our bags, show our passports, boarding passes, and enter the terminal. Once inside of the terminal we were given a group number and directed to a large room with lots of chairs. We waited and waited. We were looking for our friends and didn’t see any of them. We started to think we were in the wrong place. We got a message from Sandy and Jerry. It seems that there were two large rooms. Everyone else was in the other room. We moved to the other room. We found out that there was heavy fog earlier and the ship was unable to enter the Port of Venice. It had just docked. I would have been nice if they would have told us that on the way in. We should have already boarded the ship. Now we needed to wait until the previous cruisers disembarked. We were way late and still waiting. Finally, they started to call the numbers for each group to board the ship. Robbie and I were in the last group for our room, the other room was still waiting. Here is where things really went down hill. I’m sure the fog played a big part, but everything was a bit disorganized. After they called our group number we got into a line to show our passport for the second time and go through security. After security we were in another line to get onto the gangway to board the ship. Once on the gangway we waited in another line to board the ship. We had to show our passports and boarding passes again for the third time to get on the deck of the ship. Once on the ship we were in a huge logjam of people on the promenade deck. The ship is very long and the line was half of the length of the ship! The line moved very slowly. We finally entered a restaurant at the back of the ship, it was closed, they were just using the space. There was another line through the restaurant. At the end of this line they were collecting everyone’s passports. This was a bit strange to us, but apparently not unheard of for a European cruise. This was our first European cruise, but we have been on many Caribbean cruises. This was the hardest time we have ever had boarding a ship! Like I said, I’m sure being late due to the fog was a big issue. Still I think it could have gone a bit more smoothly. I think for one thing they called the numbers for the groups too fast. They should have waited until one group was almost finished before calling the next group. We would have waited in the big room longer, but we wouldn’t have been standing in lines forever!

We found our cabin and were able to freshen up a bit. We were happy with our cabin. Going the cheaper route, we opted for an interior cabin. This one was much roomier than our cabin on the Cuba cruise where we also opted for an interior cabin. Next was the mandatory safety drill. You must gather at your assigned lifeboat and they explain the emergency procedures. By then we were starving! It was too early for the dining room and the buffet was between lunch and dinner……… Grrrrrrr! Luckily the pizza station and the burger and fries station were open, Yeah! We were exhausted but on the ship finally!