Road Trip to York PA. A side trip to Washington DC. Day 2 part 2 (AKA Hamilton Tour)

Robbie and I found a nice pizzeria and sat down for a nice long relaxing lunch. We were very hot, tired and thirsty. Feeling very refreshed from our lunch, we got back to sightseeing. We heard that there was a Freedom Ride rally on the National Mall. We headed to the National Mall to see what was going on. There were lots of people with red shirts, even a few horses. We hung out there for a while and listened to a few speakers.

Our next stop was on the list of monument to Hamilton characters. The Library of Congress: James Madison Memorial Building. Madison was one of the first people to indicate a need for congress to have a library. He suggested a list of books that would be helpful to members of congress. Inside the main hall of the Madison Building there is a statue of James Madison. Unfortunately, due to covid, all of the federal buildings were closed to the public. There was a very nice capitol police officer at the door. He informed us that we were not allow to enter. Robbie asked him if he would take a photo of the Madison statue for us. He said yes! So he took Robbie’s phone inside and took a few photos of the statue for us. We were very grateful and thanked him for taking the photos for us. We didn’t tell him about our Hamilton tour but we did mention the other reason that we wanted to see the Madison statue. James Madison and I are “cousins” or something like that. My Grandmother was a Madison from Virginia, apparently her family goes back to James Madison’s uncle. So James Madison and I share a great grandfather.

Our next stop was another one on the Hamilton tour, the Jefferson Library of Congress Building. Unfortunately also closed. This is the main building for the Library of Congress. We were able to go inside on our last visit to DC a few years ago. It’s a very beautiful building!

They call it Capitol Hill, because the Capitol Building is on a hill. It doesn’t look like a big hill, until you walk to the top of it! We are from Florida, so the biggest hill we have is an ant hill. Walking up and down Capitol Hill made us quite tired. We planned on using the car for the next places on our list. So we headed back to the Hotel to take a break before heading back out. About half way to the hotel we took a little break at the fountain for the National Botanical Garden.

Road Trip to York PA. A side trip to Washington DC. Day 2 part 1(AKA Hamilton Tour) 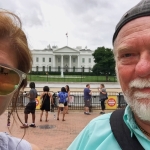 My wife Robbie and I took a road trip to York PA to see my family. It was great seeing everyone again, we really missed them a lot! We had a great visit but it was time to head home. We planned on visiting Washington DC on the way back to Florida. We spent two nights in DC, this way we would have one full day to see all of the sights. We had a very full day planned, we wanted to see everything! We wanted to visit some of the Smithsonian museums while we were there. In the past, you pretty much just walked into the museum you wanted to visit. During our visit in June, because of the covid pandemic, they were restricting the number of people visiting each museum. To control this we needed to get a free admission ticket online, 30 days in advance! Unfortunately, we started planning our trip less than 30 days before. We were unable to get any museum admission tickets. According to the website they were holding a small number of tickets for walk ups. We wanted to see the new National Museum of African American History and Culture. It was under construction during our last visit a few years ago. We planned on being there in the morning when they opened. On the way there we took the scenic route through the Mary Livingston Ripley Garden next to the Smithsonian Arts and Industries Building. There was a line of people waiting to get into the African American Museum. We asked the woman who was checking tickets if there were any left for today. She said that there were no more tickets for today. She told us that to get tickets the day of, you actually needed to go to the website the day before at 4:30 to get them. So we were unable to get tickets for any of the museums. I checked recently and it looks like you no longer need to get a ticket to enter the museums.

Robbie is a huge Hamilton fan, so while we were in Washington DC we also wanted to see all of the monuments to Hamilton characters. Alexander Hamilton was the first Secretary of the Treasury. The US Treasury Building is just a few blocks from the African American Museum, so this was our next stop. There is a statue of Hamilton at the rear of the building. This also seems to be the main entrance, there is a security fence with a guardhouse there. We were only able to see the Hamilton statue from a distance. In the front of the building along Pennsylvania Ave is a Statue of Albert Gallatin, the longest serving Secretary of the Treasury.

Walking from the back of the Treasury Building to the front, we passed the Sun Trust Building. It’s just a neat old red brick building.

Walking down Pennsylvania Ave, we came to Lafayette Square. There is a statue of the Marquis de Lafayette, a good friend of Hamilton and French ally who helped win the American Revolutionary War. One of the men at the base of the statue is Comte de Rochambeau. Rochambeau and his French army were instrumental in defeating the British at Yorktown and winning the Revolutionary War. He is mentioned in Hamilton at the battle of Yorktown.

We were able to get into The White House for a photo though! No, not really. We stopped at The White House gift shop down the street to do some shopping. With our purchases, we could go around the corner to a small studio, for a free photo in a faux White House.

Heading back down Pennsylvania Ave we came to Pershing Park, sort of a two for one memorial. It honors General Pershing on one half and World War One on the other. The artwork reflecting in the pool will be replaced by a bronze mural when it’s completed. It’s a really pretty memorial.

We were getting pretty tired and hungry from walking around seeing the sights. We found a nice pizzeria and had a long relaxing lunch. The pizzeria was just around the corner from Fords Theater and the Peterson House across the street. The Peterson House is where President Abraham Lincoln died after being shot in Fords Theater. After seeing Fords Theater we walked across Pennsylvania Ave and got a good view of the Capitol Building. We were in Washington in June, it was Pride Month, the Federal buildings were flying pride flags. This one was the Commerce Building. 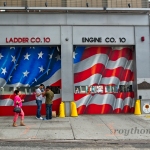