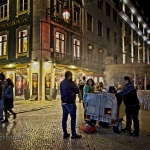 Robbie and I along with our other traveling companions explored Lisbon all afternoon. We really enjoyed this beautiful city. The sun was setting and it was time for a break. We moved off of the main street to find a restaurant for dinner. We found a quiet little Portuguese restaurant. Although we were quite hungry, it was still a little early by European standards, for dinner. That was good for us, we had the place to ourselves. We had the undivided attention of the owner and staff, we were treated like kings! We had a really nice Portuguese dinner and relaxed with some refreshments. We were all refreshed and ready for more of Lisbon.

Lisbon really shines after dark. It becomes even more charming, almost fairy-tale. The lights of the city were beautiful. We meandered down the mosaic sidewalks. There were chestnuts roasting on an open fire, adding to the charm. As we were walking, someone would see a shop they wanted to go into. While they were doing a little shopping, I would take the opportunity to take a few photos. We found ourselves at the beautiful Santa Justa Lift. Lisbon is by no means flat! The old town area where we were, the Baixa Pombalina district is in a valley, surrounded on three sides by large hills. We in fact had a bit of an uphill climb to get back to the hotel. The Santa Justa Lift was built in the early 1900s as an easy way to get to Barrio Alto on the top of the hill. It’s a beautifully ornate iron elevator. The lift was designed by Raoul Mesnier du Ponsard, an engineer from Porto who was a student of Gustave Eiffel, of Eiffel Tower fame. You can see the similarities in the ornate iron work on both towers.

We continued taking in the beauty of Lisbon after dark. We then found ourselves at the Rossio (town common). Its official name is Parca de Dom Pedro IV. The centerpiece of the huge plaza is the bronze statue of Dom Pedro IV, king of Portugal, on top of a tall column. An interesting urban legend about the statue says it is actually a statue of a Mexican king who looked like Dom Pedro and was purchased at a bargain price. The statue is flanked by two beautiful fountains. The plaza is paved with a wavy tile mosaic. It’s meant to mimic waves, highlighting the seafaring explorers of Portugal’s past, as are many of the mosaics. If you stare at them, you actually feel like you are on the ocean. The beautiful National Theater and the Rossio Train Station are at the far end of the plaza. The group was ready to head back to the hotel. I wanted to try to find the Elevador da Gloria. So Robbie and the rest of our group set off for the hotel, I went in search of Gloria.