Our Venice Cruise Chapter 20: The Greek Island of Mykonos 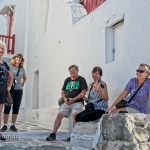 One of the things I like about cruising is that your floating hotel takes you from place to place. After an awesome day in Rhodes, we arrived back on our ship, the Lirica. As we were freshening up and getting ready for dinner, the Lirica’s crew prepared to head out to sea. It’s fun to go on the upper deck and watch the sail away from port. We usually ate dinner as a group in the main dining room. After dinner, we would watch a great show in the main auditorium. As we were sleeping, the Lirica would take us to a new and exciting port.

Today we woke up on the Greek Island of Mykonos. If you like, the cruise line will plan your whole day for you. This does come at a cost though. Wherever possible we liked to do some exploring on our own. Mykonos is a great port to explore on your own. It does, however, require a small ferry ride to get from the cruise port to the town. The cruise line hired a ferry to transport passengers to town. They made it very convenient and quite easy to charge for this ferry. It pays to do a little research about each port. I found out that you could buy a ticket directly from the same ferry company for considerably less. Not only was it less expensive, they used a different ferry. The ferry was not as jam packed full as the cruise line ferry. A side trip we could have taken while visiting Mykonos, is a trip to the ancient ruins on the nearby island of Delos. The cruise line has a shore excursion to Delos. This same ferry company also goes to Delos for less. We decided not to go to Delos. Robbie and I and a few of the others spent the day in Mykonos. There were a couple of people in our group that did do one of the Mykonos shore excursions. Disembarking the ship was quick and easy. We found the ticket booth for the ferry and purchased our tickets. On the way to the ferry, there were several brightly colored, old wooden fishing boats. I really liked these old wooden boats.

Getting off of the ferry in the old port of Mykonos, we were greeted by a reminder of our old friend again, Agios Nikolaos (Saint Nicolas). St. Nicolas is the patron saint of sailors and fisherman. Agios Nikolaos, the small whitewashed church with its bright blue dome has a prominent place in the old port. Locals would enter the church to light a candle and say a prayer for their sea going friends and family. Mykonos is dotted with dozens of small whitewashed churches with brightly colored domes. Each ancient local family was required to build a small church to worship and celebrate religious holidays. The small churches also housed the bones of family members. There must have been lots of families on Mykonos back then.

Strolling through the giraffe patterned stone streets of Mykonos is a wonderful way to spend an afternoon. The narrow streets are lined by whitewashed buildings, with blue or red trim, laced with colorful bougainvillea. There are lots of shops selling everything from souvenirs to high end clothing, jewelry and art.

Having just been in Venice, we needed to check out a small section of Mykonos called Little Venice. It’s basically a row of buildings that were built right on the edge of the sea. Most of them are restaurants or bars with an awesome view of the Aegean Sea.

From Little Venice we got a great view of the windmills of Mykonos. The windmills are the most well known landmarks on the island. Six of the windmills are on a hillside overlooking the Aegean Sea. This is a beautiful location with an awesome view of the sea. This was also the best location to harness the winds of the Aegean. The wind power was used for grinding grain. Today some of them have been converted into homes. One of them is listed on Airbnb. That would be a great place to stay.

As we were making our way through the town, Sandy kept an eye out for a nice restaurant to have lunch. She thought Katerina’s looked nice. Katerina’s was one of the restaurants in Little Venice. So we made our way back to Little Venice. Sandy made a great choice, Katerina’s was awesome! We had a nice view of the Aegean and our waiter was great! I had the linguini and shrimp, it was very good! Everyone else enjoyed their meals as well. The waiter brought us some baklava to share; it was amazing! As we were finishing our lunch two weary travelers came in. It was Sherry and her husband Jeff, from our group. They had taken one of the shore excursions. It was interesting that they chose the same restaurant. “Of all the gin joints in all the towns in all the world, she walks into mine.” (Casablanca)

Feeling rejuvenated from our refreshing lunch, we made some plans for the rest of our afternoon. While doing my pre-trip planning I was reading about Boni’s windmill. Boni’s has been totally restored and is now a museum. Unfortunately the museum was closed for the season. The best thing about Boni’s is the location. It’s perched high above Mykonos and has the best view in town. So I wanted to go to there. Barb wanted to do some shopping, so we split up. Robbie went with Barb, Sandy and Jerry. Marcia and her husband Jack came along with me to Boni’s. The thing about the best view in town is that it involves a fairly steep climb. We huffed and puffed and the view kept getting better and better, driving us to the top. The climb was totally worth it. The view from Boni’s was amazing! Marcia and Jack saw another place they wanted to explore. I wanted some more photos of Mykonos, so we split off exploring in different directions. I made my way back down the hill through a maze of narrow walkways with whitewashed buildings and churches. Back at sea level there was a nice beach. A dip in the Aegean would have been nice. I didn’t bring my swim suit though. Walking along the waterfront, I found Robbie and Jerry having drinks at a cafe. I ordered a nice cold Greek beer as we waited for Sandy and Barb. On the way to the ferry I had to get a gelato. They wouldn’t let me on the ferry with it, but we still had some time before it departed. Still no sign of Marcia and Jack. We hoped they would catch the next ferry, and they did. Mykonos was a great town! It had a very relaxing vibe to it. Just lazily wondering this beautiful town was an enjoyable way to spend the day.