What a beautiful Star-filled night for a predawn Space Coast Rocket Launch! United Launch Alliance launched an Atlas V rocket carrying the Lucy Space Probe. Lucy will be exploring the Trojan Asteroid Belt in Jupiter’s orbit. After the launch the wind blew the rocket’s contrail into a cool smoke-ring in the sky.

Click on photo to see larger. You will miss all of the stars if you don’t.

After photographing the rocket launch, at Space View Park in Titusville Florida, I stuck around with a few other photographers and a few others that were just waiting for the sun to rise. It was a beautiful light show, a pod of dolphins went swimming buy as well. It was worth the wait! 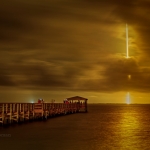 Usually when I do a streak photo of a night launch, I like to get the arc. As a rocket launches, it ascends into the sky. When it reaches altitude it levels off and continues to fly. Due to the curvature of the earth, from the ground, it almost looks like the rocket is coming back down. During a long exposure night photo, you are actually photographing the light from the rocket engines. This makes a streak in the sky, due to the curvature of the earth the streak makes an arc in the sky.

Now, to work out the exposure. A typical rocket takes 3-3.5 minutes to reach orbit. I usually use 3 minutes for my shutter speed for testing my exposure. In real time I will hold the shutter open until I can no longer see the rocket. To work out the f-stop, I do a series of test exposures at different f-stops. The amount of lighting on the foreground will determine the proper f-stop. When the foreground is exposed properly with a 3 minute shutter speed, that’s the correct f-stop. In this case it was f-16.

I photographed this launch from the newly renovated Rotary Riverside Park along US 1 in Titusville. The park had been destroyed by a hurricane a few years ago. It had just been reopened a few days earlier. 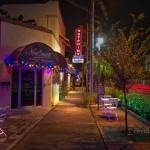 I was in downtown Titusville to photograph a night rocket launch. The rocket launch was scrubbed. So I started roaming around town taking photos. I really like this old Hotpoint sign. I have photographed it several times over the years. The woman’s clothing boutique that is now located in the old appliance store was named for the sign. It is called Hotpoint Boutique. I was happy that they restored and kept the old sign.