When visiting the wall there are a few things that you need to know. Like the security gate, there is a men’s side and a women’s side. Robbie was quite fascinated/disgusted with the gender separation thing. Men need to cover their heads with a hat or a yarmulke skull cap. This is to remind you that God is always above you. If you don’t have one, no worries, they have them there for you. I had my trusty fedora, so I was covered. Women need to cover their shoulders and their knees. It is customary to wash your hands before praying. There are several places to wash beforehand. I didn’t know about this at the time, but you should not turn your back on the Holy of Holies. So the devout back away from the wall. People write prayers and wishes on paper and place them in the cracks of the wall. You may only photograph the wall from the plaza, no photography at the wall. On the Sabbath or Jewish holidays there is no writing and no photography, even from the plaza. Visiting the wall was quite an experience. It’s one of those places that I heard about most of my life. I wasn’t sure that I would ever actually get to see it. There I was in front of it, touching it. 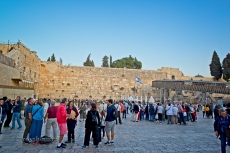 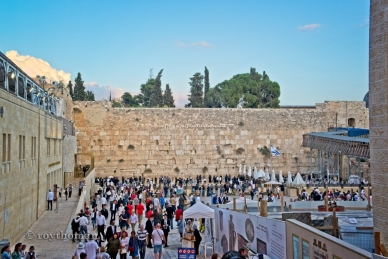 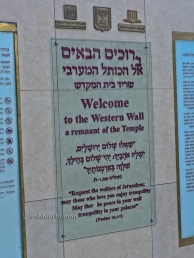 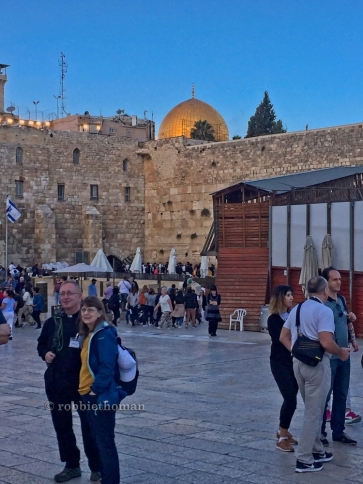 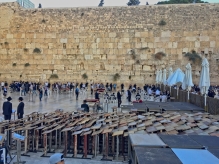 After visiting the wall we were all sort of standing around. It turned out our tour group was supposed to be using the restroom. A few of the people, including myself, didn’t realize that. By the time I was done in the restroom, the group had started to exit the plaza through security. I was able to catch up, since the line was moving slowly. I started to take a few photos. I could still see the last person in our group, but I was about ten or so people behind. Just as I was going through the security gate, they stopped letting people through. Apparently a group of VIPs needed to get to the wall before sundown to pray. I needed to wait for them to go through. Our group was behind schedule, so our guide was in high gear, walking really fast. When I finally got through the security gate, there was a “T” in the path. I could go left or right. There was no sign of our group in either direction. After starting to go left, I chose to turn right. That was the correct choice. I caught up to the group down the street a bit. Unfortunately one woman from our group was not so lucky, she was lost. Our guide went back to look for her, but no luck. We continued on our way without her. We were walking through narrow walkways, going up ancient stone steps. There was a bazaar, with lots of shops selling all sorts of things, very colorful and full of people. 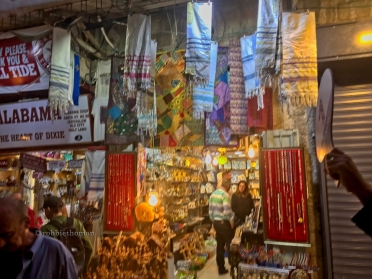 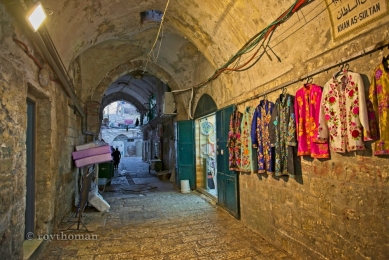 When I do any tour, I usually try to get as much photography in as possible. As a result, I tend to miss out on some of what the guide is talking about. Things like it’s time to use the restroom. The fact that we were on our way to the Church of the Holy Sepulcher would have been good info, so when I got lost I would know what direction to go. Oh, and most importantly, what we should see when we get there. Aside from walking really fast, our guide, I found out later, was not quite a fountain of information. I thought it was me not paying close enough attention. The Church of the Holy Sepulcher is a fairly complicated building. It contains the locations of events before, during, and after the crucifixion of Jesus. It pays to know what and where the events are inside of the church. Some of the key events are, the Latin Chapel, where Jesus was nailed to the cross. Calvary Rock, where the cross was erected. The rock is exposed for viewing. Adams Chapel, under Calvary, where the skull of Adam had been found under the cross. The Stone of Anointing, just inside of the entrance, where Jesus was wrapped in the shroud. And finally, the Tomb of Jesus, the Holy Sepulcher, in the main rotunda. I was always under the impression that these places were a little farther apart, guess I was wrong. The whole area was an abandoned quarry that had been turned into tombs before the time of Jesus. 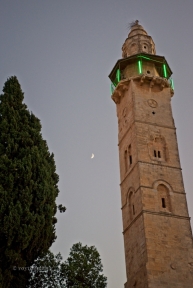 When we arrived at the church, our guide told us what time to meetup back in the courtyard. Guides are not permitted to talk inside of churches. That’s pretty universal all over. While we were supposedly touring the church, he set off to search for our lost woman. Remember her?! The courtyard was filled with people. The doors of the church seemed to be only open a tiny bit. Nobody was able to enter. We were all waiting and waiting, still no movement. A group of pilgrims carrying a cross entered the courtyard. We pretty much had resigned to the fact that we were not going to get inside of the church, so we relaxed for a while. I noticed the doors had opened and a few people were going inside. I guessed there was some sort of service going on, not sure though. We were running out of time. I went inside for a quick look around. Robbie, Kris and Kim stayed outside. I was able to see the Stone of Anointing and the Chapel of Adam. In the photo of the chapel, behind the alter is what looks like a picture frame. That is a window to view part of the Stone of Calvary in the area where Adam’s skull was found. In the photo of the Stone of Anointing, people are rubbing clothing on the marble slab to get the essence of Jesus. This slab of marble is on top of the actual Stone of Anointing to protect it. If I would have had more information, I could have seen the tomb as well. I was running out of time and I didn’t know exactly where it was. Our group had reassembled in the courtyard waiting for the guide to return. A short time later, he did return, with the lost woman, yeah! I’m not sure how he found her in the sea of people, but he did. We headed toward the bus at a pretty fast pace. Some people started asking the guide to slow down! As we exited the walls of Old Jerusalem we could see the Tower of David in the far corner of the wall. It was a long day and we had a two hour drive back to the ship. Despite a few issues, it was really great getting to see Old Jerusalem.