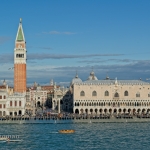 It has been said that all good things must end. Sadly our cruise came to an end. Early in the morning on the last day of our cruise we returned to Venice. The night before we needed to have our bags packed and ready to be picked up. They were taken to the lower deck to be unloaded at the dock in the morning. This helps get everyone get off of the ship more efficiently. It’s sort of a strange feeling. It’s a big sign that the cruise is coming to an end. Also there is a bit of anxiety, wondering if you packed something you need until you get the bag back again, or if you didn’t pack enough and have too much stuff in your carry-on the next morning. I woke up early the next morning. I wanted to see Venice as we sailed past. I went to the upper deck to get a good view. Venice is an island that’s sort of shaped like a fish. Ships enter the curvy narrow waterway around Venice at the bottom of the tail of the fish. They continue winding their way along the belly of the fish between Venice and some smaller islands. The cruise port is at the mouth of the fish. This path takes the ship right past St. Mark’s Square. I wanted to see St. Mark’s as we passed. From the upper deck I could see a lot of Venice as we sailed by. It was a beautiful clear morning. The fog that delayed our cruise on the first day did not appear. Cruise ships for their size are very maneuverable. Typically they can get into any port on their own without any help. I have seen them do some amazing things. Sailing into Venice, our ship was tethered to several powerful tugboats. Several months prior to our trip, a cruise ship sailing into Venice lost power and collided with a docked river cruise ship. This elevated the existing campaign to have the cruise port moved away from Venice. Also, this is why we needed the tug boats.

The weather for our trip was amazing! We sailed in the fall. The cruise started at the end of October and ended the second week of November 2019. We had summer-like weather for the entire cruise. It only rained a small amount the morning we were in Dubrovnik. The northern Adriatic sea was not so lucky. We were sailing in the Aegean and Mediterranean seas. I heard there were some nasty storms that caused other cruise ships to miss some ports. That happened to us on our first cruise, it was not good, but that’s another story. On the upper deck there was a definite chill in the air. Fall temperatures had returned. I was taking in the beautiful city as we sailed by. As we approached St. Marks, I noticed the square was flooded. They were experiencing an acqua alta. This is when Venice is flooded by an exceptionally high tide. The water retreats at low tide but tends to return again with the next high tide. A few days after we left at the beginning of the cruise, there was a record breaking acqua alta. The highest in over 50 years!

After watching the beautiful city of Venice glide by, I met up with Robbie. We went to the dinning room for our final cruise breakfast. One thing about cruising, there is no shortage of good food. I gain 5-10 pounds on every cruise. After breakfast, we went back to our cabin for the last time to collect our things. They wanted us out so they could start getting the cabin ready for the next passengers – in just a few hours. We were assigned a group number and time for disembarking the ship. We made our way to one of the nice lounges to wait for our time. They called our number and we exited the ship for the last time. We met up with Sandy, Jerry, Marcia and Jack on the dock. The rest of the group had made other arrangements to get back home. We shared a cab to our hotel in Mestre. Venice, as I said, is an island. Mestre is a small town just on the other side of the causeway that connects Venice to the mainland.

We had a flight the next morning to Lisbon Portugal, so we had the evening to spend in Mestre. We had not planned on going back to Venice due to the limited time. After we all got settled into our hotel rooms, the group wanted to go to lunch. Robbie and I were a bit tired so we decided to rest for a while and go out later. Also there is that Italian thing I mentioned before, where some restaurants are closed for what we call “lunch time.” After we rested and relaxed for a while, Robbie and I ventured out. The woman at the desk told us where we could get a good pizza, so we set out to find the restaurant. After one or two wrong turns, we found it. You can’t really say that you’ve properly seen a new place unless you make a few wrong turns. We ordered a pizza, beer and wine, it was amazing! No worries, we did eat the whole pie. We need to remember to get a photo before we dig in. There was an awesome dessert as well. We stopped at a grocery store for some supplies on the way back to the hotel. It was nice getting to see a little of Mestre before moving on.

Authors note: We took this trip in Oct./Nov. of 2019. I took a gazillion photos. It takes me a long time to sort and edit my photos. My plan was to write most of the posts about this trip before I started to post them. I am not the fastest writer by any means. It’s surprising how long it takes to write 500 or so words when you choose your words carefully. So I knew from the beginning that it was going to take me a while to start posting about this trip. Anyway, I’m ready to start posting and BAMM!! We find our self in the middle of a global pandemic! Cruise ships are stranded at sea and people are dying onboard! That sort of took the wind out of my sails. I didn’t think this was an appropriate time to start posting about a wonderful cruise. So I shelved my cruise posts. Time flies when you’re not having fun. It’s now been a year since we departed on our trip. What a year it’s been! I’m not sure what the future holds for the travel industry. I was hoping to be traveling again in the spring of 2021. Now it may be longer and even longer yet for the cruise industry. For now I hope that you will enjoy reading about our Italian, Aegean Sea cruise.

No rest for the weary! We had two wonderful days of sightseeing in Israel. But we didn’t stay up too late partying. We needed to get an early start the next morning. We had a short 170 mile cruise to our next port of call, Limassol, Cyprus. We opted to do a shore excursion in Cyprus. Limassol is a great town with a beautiful waterfront area, but when in ancient Greece/Rome, we should see ancient Greece/Rome.

We took a trip to the Kourion Archeological site with a wine tasting stop afterwords. The Limassol area of Cyprus is a big wine producer. The ancient city of Kourion was a thriving Greek city. It was taken over by the Romans in approximately 58 BC. They gave it all of the Roman amenities. First we entered the house of Eustolios. The house had very elaborate mosaic floors. There were several Roman baths. They had a very sophisticated water supply system throughout the town. We could see the remains of the clay water pipes in the ground. They almost seemed like they were from 1900 rather than 200. There was a beautiful Roman style amphitheater with an amazing view of the Mediterranean Sea. I think at first they held theatrical performances there. After the amphitheater was expanded, they held gladiator contests and man against beast type contests. They still perform ancient Greek plays in the amphitheater today. I think the amphitheater would be a great place to see a show.

We took a short trip down the road to the other side of Kourion to see the Sanctuary of Apollo Hylates. This is where the citizens of Kourion came to worship the god Apollo Hylates. Who was Apollo Hylates? Hylates was the Greek Cyprus god of the forest or nature. Apparently he sort of morphed into the Greek god Apollo who was the god of many things, mostly the god of light. Greek mythology seems to be a bit willy-nilly. The Apollo Hylates combo, as far as I can tell, was only worshiped on Cyprus. He was considered the god of the forest or nature of Cyprus. I was wondering how the Greek gods changed after the Romans took over Kourion. It turns out that Apollo is one of the few gods who is the same in Greek and Roman mythology. But maybe that’s how Hylates and Apollo came together, hmm. The alter in the sanctuary was considered very sacred. In fact, anyone who touched the alter who was not a priest, was taken to a cliff and thrown off! Kourion was inhabited from the eighth century BC until the fourth century AD. It saw several earthquakes and wars. Most of the city had been damaged and rebuilt. There was a rather large earthquake in the fourth century AD that was probably its demise. As far as ancient ruins go, Kourion was very interesting. It wasn’t hard to imagine all of these buildings in their full complete splendor. Romans in togas and sandals wondering around town taking advantage of all of the high class Roman amenities.

We had about a 30 min. bus ride to our wine tasting stop in the village of Omodos. There were hills and valleys all over the island. As we were driving through the countryside, it was interesting to see the terraced hillsides all around us. Some of them seemed bare, but they were created to grow the grapes for the wine we were on our way to taste. We arrived at Taverna Ambelothea; a beautiful old stone building. They had a table set up with three different wines to taste. The wines were very good. We were thinking about taking a bottle with us. But back at the ship you need to turn in any alcoholic beverages to be kept until the end of the cruise. They would like you to buy their alcohol please. We ended up not taking any back with us. We relaxed on the porch taking in the wonderful view. Barb found another cat. We headed out for a tour of the village.

We had a nice walk through the village. They make this odd looking confection called Sousoukos. It’s made from surplus grapes from the wine making and almonds. They string the almonds up and dip them in the waxy grape juice mixture. They look like candles, they are made like candles, and they sort of taste like candles, with nuts. Omodos was a wonderful traditional small village. We had a wonderful afternoon exploring the village.

Limassol cruise terminal’s architecture is very interesting. I thought the oval windows were pretty. I liked the way the light came through them.