Road Trip to York PA. A Side Trip to Washington DC. 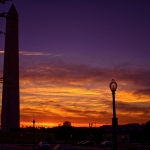 Robbie and I had a great time in York PA visiting the family. It was awesome seeing everyone again. We missed them a lot! It’s always nice getting back to York. Hopefully it wont be so long until we get back again. It was time to say goodbye and head back home. It’s a really long drive back to Florida. To break it up a little, we planned a side trip to Washington DC. One of Robbie’s favorite cities. On our way from Florida to York we stopped at Mount Vernon. By the time we arrived it was too late to take a tour. We decided that we would stop at Mount Vernon again on our way to Washington. This time we arrived with plenty of time to take a tour. Due to covid restrictions they were limiting the number of people allow to take a tour of the inside of George Washington’s mansion. Although we could still walk around the grounds and see the farm and the mansion from the outside, they had reached the limit for tours of the inside of the mansion for the day. The admission to Mt. Vernon is fairly expensive. Since we could not see the inside of the mansion, we decided not to take a tour. There is a nice restaurant there next to the gift shop so we had a good lunch before heading into Washington.

We had booked a room in downtown DC at the Holiday Inn. It was just three blocks from the National Mall, just behind the Air and Space Museum. This was a great location, most of the things we wanted to see were within walking distance. Our rate included come and go parking privileges for the parking garage, very important when visiting DC by car. The hotel was really nice, our room was on the top floor. The room was fairly large and had a sitting area with a sofa. There was also a refrigerator that we made good use of. Along with a view of the inner courtyard we could just see the top of capital dome from our window. There was a rooftop pool, but due to covid, it was closed.

I wanted to see how my new little Fujifilm X100V performed for travel photography. The X100V is a very small camera and easy to carry around. Although it is a small camera, it has all of the features and capabilities of a larger camera, with one, well, two exceptions. The X100V has a the smaller C size sensor (lots of big DSLR cameras have C sized sensors too, so not much of an issue) and a fixed 23mm focal length lens, equivalent to a 35mm focal length lens on my full frame size sensor Nikon (sensor size affects the focal length). I normally use a 24-70mm zoom lens on my Nikon. So the 35mm equivalent focal length lens on the X100V is in the middle of the range that I’m used to using. I was eager to see how being tied to the fixed 35mm (equivalent) focal length would affect my photography. There was still lots of daylight left, so I thought I would walk around and take some photos. When I photograph a place like Washington DC, if I have time, I like to walk around and sort of just follow my nose. I usually have a few things that I want to photograph, but I like to keep things loose. I like to also be able to photograph things that I find along the way. Here, my main targets were the Capitol building and the Washington Monument. If I found something along the way, all the better. I walked a few blocks from the hotel on the way to the Capitol building and found the National Museum of the American Indian. This museum has some really nice architecture. I was having a great time photographing it. This museum was not on my list of places to photograph. Not having a strict itinerary allowed me to spend some time on a found place. Tomorrow will be much different, we have a larger list of places to see, so I won’t have as much time for found places.

I walked all the way around the Capitol Reflecting Pool then started down the National Mall. There was not a large number of people on the Mall. The people who were on the Mall had been taking part in many activities. They were sitting in the grass relaxing and enjoying the beautiful evening. People were walking, taking in the sights, like me. They were playing games and having fun. Bike riders and rental electric scooter riders were zipping up and down the Mall. A Segway tour passed by. There were people sitting on benches just watching the world go by. It was a great evening to be on the Mall. I was treated to a colorful sunset as I approached the Washington Monument.

On my way back to the hotel I stumbled onto the Mary Livingston Ripley Garden. The garden is a beautifully landscaped brick walkway between Jefferson Drive and Independence Avenue. It’s part of the gardens surrounding the Smithsonian Arts and Industries building, the prominent 1800s redbrick building along the National Mall. The Air and Space Museum was undergoing a renovation and had construction fencing around parts of it. I poked my camera through the fence and I was able to get a photo of the Delta Solar sculpture. Just a block from the hotel I passed the Dwight D. Eisenhower Memorial with a nice view of the Capital Building. I had fun walking around the Nations Capital taking photos. I was very happy with the performance of my little Fujifilm X100V. Occasionally I needed to reposition myself to frame an image. With my 24-70mm I would have been able to simply zoom. For the most part thought I was working well with the fixed focal length. The camera was really nice to carry around, I felt very light and free. I just had the small camera, with an extra battery and lens cloth in my pocket.

Road Trip To York PA, A Visit To The Farmers’ Market 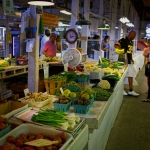 Our second day on the road from Lumberton NC to York PA went well, we didn’t run into too much traffic, a little but it wasn’t too bad. We did plan a small side trip but that didn’t work out so well. We wanted to stop at George Washington’s Mount Vernon. It took longer to get there than we thought it would. We didn’t arrive at Mount Vernon until after 4pm. Mount Vernon unfortunately closes at 5pm. There was not enough time to have a proper visit. So we took a spin around the gift shop and had a small break and got back on the road. We did a drive through Washington DC to take a quick look around and then headed to York. We arrived at my parents house around sunset. We stayed with them while we were in York. It was awesome to see them after being away for so long!

The next morning we wanted to take a drive around York to see the old and the new. Just to see what had changed and what had not. York has two farmers’ markets downtown. I would have like to have seen both of them but we only got to visit the Penn Market on where else, Market street. I always enjoy visiting farmers’ markets where ever we go. I enjoy the sights, the sounds, the smells, and the hustle and bustle. I think my fascination with farmers’ markets was born here at this market. My grandma Peggy lived just around the corner. Grandma Peggy lived alone and did not drive, but both markets were just a short walk from her apartment. There were no grocery stores close by so between the markets and the 5 and dime store, this is where grandma did her shopping. When my brother and I were young boys, grandma would take us to the market. She would grab her wheeled market basket and off we would go to the market. Two things I remember getting at the market were caramel cake and sugar cookies. This could also be where my sweet tooth was born. The caramel cake was very unique. It was a regular two layer cake with a very yummy caramel flavored butter cream frosting. The frosting was a weird brown color. To someone who was not familiar, it probably didn’t look too appetizing. But it was amazingly good! The sugar cookies were not really cookies. Although they were large for cookies, they were really a small cake that sort of looked like a big cookie. They were a round, sweet yellow cake with a sprinkle of coarse sugar on top. Very yummy dunked in milk, tea, or coffee. I think they are a Pennsylvania Dutch thing. My mom and dad now live close to a farm store that used to have a booth at the market. They still have the sugar cookies! I always enjoyed our trips to the market. Just going downtown when I was a kid was always a good time. I will always remember the wonderful smell of peanuts being roasted at the news stand. I don’t get this sloppy, wet Florida/southern boiled peanut thing. I was happy to see that the market was still open, but it was disappointing that it was only half full. I remember it being jam packed full of vendors and people. Market day was always a busy day for the farmers as well as the customers. We picked up some York county strawberries. York county strawberries are the best!