The ROM in Black and White

On our trip to Toronto Canada last spring my wife and I stopped by the Royal Ontario Museum (ROM). I saw some photos of the ROM when I was researching our trip.  I really liked the geometric architecture, so I definitely wanted to photograph it. Unfortunately, we didn’t have enough time to go inside and take a tour of the museum’s galleries. They have quite an extensive collection.

The original building is a stone Neo-Romanesque style, built in 1910.  The modern aluminum expansion called the Crystal, was added nearly 100 years later in 2007. Most of the original building is still visible and the contrast between the two styles is quite dramatic.  The public opinion of the new addition was quite dramatic. Like when the glass pyramid was added to the Louvre in Paris, lots of people hated it. I gave these images a dark dramatic look to emphasize all of the drama. Love them or hate them, I enjoyed photographing both the glass pyramid and the Crystal.

I really like all of the angles and geometric shapes of the Crystal. The large glass windows are at the perfect angle to reflect everything going on in the street below. I could have spent hours photographing the changing traffic patterns in the reflections.

Click on an image to see it full size. 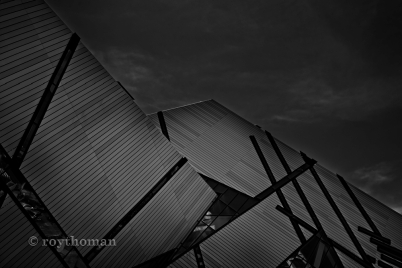 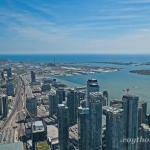 No visit to Toronto would be complete without taking a trip to the top of the CN Tower. The tower was constructed by the Canadian National Railway, hence CN Tower. The tower is 1,815 ft. tall and it was the worlds tallest free-standing structure from 1975-2007. There are three visitor levels and a revolving restaurant. Robbie and I skipped the restaurant on this trip. We were visiting in the off season, so we just went right to the elevator. It looks like certain times of the year there can be a rather long wait to get to the top. The elevator ride is a short one. You are traveling at 20 ft. per second, the trip to the Indoor Lookout Level takes 58 seconds! The elevator shaft is glass so you get a nice view of the city on your way up. Oh, you may or may not want to look down, the floor is glass too. Your ride ends at the beautiful Indoor Lookout Level at 1,135 ft. It’s a large climate controlled area with huge glass widows. You get amazing panoramic views of Toronto and Lake Ontario. Don’t forget to look up at the mirrored ceiling, very cool. The friendly CN staff will happily take your photo with your camera. 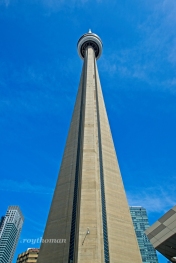 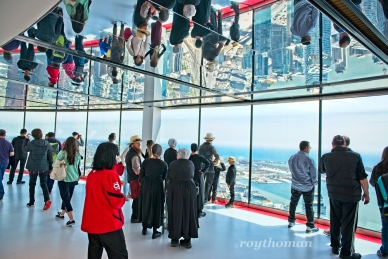 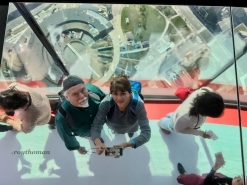 Next you can visit the Outdoor Observation Terrace. Protected by wire mesh you can feel the wind in your face at 1,122 ft. get a 360 deg. birds eye view of the area. I think we walked around 3 times. Next visit the Glass Floor. There is an area inside on the terrace level that has a glass floor. The glass is super thick and super strong and super safe, but walking over the glass still made my tummy crawl! Standing on the glass and looking 1,122 ft. down is quite the thrill! You know nothing is going to happen but still, your seemingly standing on thin air! Your brain is telling you, this.is.not, a good idea!

I’m not sure if we were lucky or if this is an off season perk. On the day Robbie and I visited the tower, the trip to the Sky-Pod was free! There is normally an extra fee. Another short elevator ride takes you to the highest level of the tower at 1,465 ft. The pod has smaller glass windows and a great view of the area. For you thrill seekers, there is the Edge Walk. For $225ca you can strap on a harness, connect to a safety cable and walk around the outside of the tower and hang out over the edge! Maybe next time, NOT! 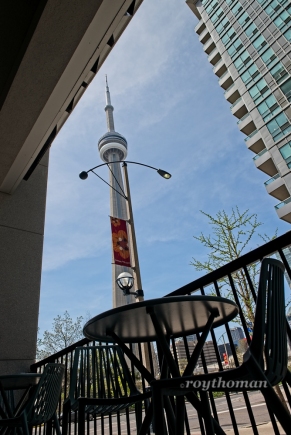 One of the things I really like about Toronto are the many little parks scattered around the city. There seemed to be a small park along the way to wherever we were going. Sitting just behind the flatiron is Berczy Park. This was a particularly cute park. Robbie and I affectionately called it The Dog Park. More accurately I suppose it’s the park with the dog fountain. The fountain is adorned with statues of 27 dogs and 1 cat. It’s a really fun fountain. The park really does cater to dogs though. The water in the fountain is purified and dogs are encouraged to drink it. There is also a designated gravel area for dogs to release the water later. William Berczy was an architect and surveyor who helped to form early Toronto. 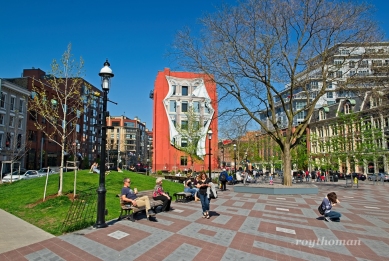 I like to get out at night to do some photography when I can. On our trip to Toronto we had full days with lots of walking. So by the time the sun went down I was pretty beat. Luckily the Strathcona Hotel, where we were staying, was a half block away from a pretty decent view of the CN Tower. So one night I grabbed my gear and walked down to the corner to take some photos. A woman was walking by and stopped to ask what I was photographing. She followed my lens and answered her own question. When she realized that I was taking a photo of the CN Tower, she said that she hadn’t noticed you could see the tower from this corner. I had to admit to her that the first time I walked by, I missed it too. We had a nice conversation, she was from New Brunswick CA. We were also right next to the  Fairmont Royal York Hotel, the building with the flags. The Royal York is where Queen Elizabeth II stays when she comes to Toronto. Pretty much the whole royal family has stayed there at one time or another. This was the weekend of the big royal wedding, so none of the royals were there. Fun fact: the Royal York has 350,000 honey bees. They have a garden on the roof to grow veggies for the restaurant. The bees pollinate the garden and provide honey. 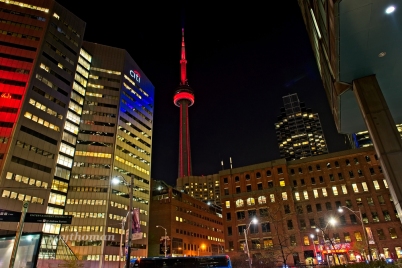 My wife Robbie had been wanting to see Niagara Falls, so we decided to plan a trip there. There are two main options when flying to Niagara Falls. One, you can fly into Buffalo NY. Two, you can fly into Toronto ON. CA. I decided that Toronto would be more interesting than Buffalo. Toronto Pearson International Airport is a fairly large airport. We had some difficulty finding our way from one place to the next.  Top tip; “Study and download the terminal map onto your phone.” I’m looking at the map now and even after being there, I would still have trouble navigating. Downtown Toronto is about 15 miles from the airport. When I booked the trip I was able to get inexpensive tickets for the UP Train. The UP Train is a quick and easy way to get into Toronto. It takes you into Toronto Union station. Our hotel was a short one and a half block walk from Union Station. The Strathcona Hotel is a cute boutique hotel in the heart of Toronto. The rooms were a bit on the smallish side, but everything else was great. This is a fantastic location, we were within walking distance of almost every place we wanted to see. Tired, weary, thirsty and hungry from our journey we decided to try the Srath Pub, in the hotel’s lower level. The Pub, as it’s affectionately called, turned out to be pretty nice. Hotel guests as well as locals frequent The Pub. If a group of construction workers stop in after work, it must be a decent place.

Toronto is a very large bustling city, very comparable to New York City. There were people in business suits scurrying from place to place. Loads of horn blowing traffic in a hurry to get where they were going. We found Toronto to be a clean, friendly and very walk-able city. All around you crowds of people are going to their next business meeting or the next spot on their must see list, speaking many different languages. We are not sure, but we don’t think we met anyone actually from Toronto. The waitress from one of the restaurants that we liked was from Ireland. It’s a very international city. There are way too many things to see and do in Toronto. On our four day visit we barley scratched the surface. 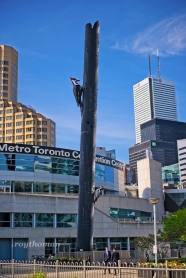 One of the things you need to do for sure is take a stroll along Toronto’s waterfront. Toronto is right on the shoreline of Lake Ontario. There are miles of walkways along the lakes shoreline. It’s a very relaxing and scenic way to spend some time. 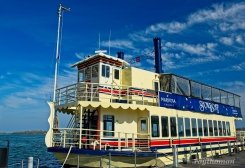 This ship is called the Oriole. If you look close you can see the oriole sitting on top of the bridge guiding the ship on it’s voiage.

Toronto is a very artsy city as well. Just about everyplace you look there is some sort of art. It’s a bit hard to see in the photo but these workers are adding an eagle sculpture to the side of this building. You can see the eagles head on the building on the right edge of the photo. His wing is still on a flatbed about to be lifted into place. On our way back the eagle is perched with both wings attached.

There is architecture of all types downtown. I was constantly clicking away at one building or another. Everywhere you looked there were tulips. We found out later that Toronto and Holland have a history together and every year Holland sends thousands of tulips to Toronto. It was very beautiful and we were lucky to be there at the right time. 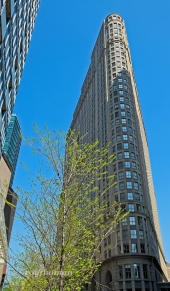 Longos, what would we have done without Longos! Longos is a great little grocery store. We stopped there several times for supplies. We got some great things for breakfast,  lunch and snacks as well as soda and water. We also got some great maple cookies and maple syrup. Empty backpacks are great for transporting supplies back to your hotel. Oh, get the cashier to make a little handle for your 12pk of water, it works great! We found that we adapted pretty well to being big city dwellers. Speaking of backpacks everybody in Toronto has one. You will want to leave a little room in your backpack. Just above Longos on the right is the LCBO. This is where you get your wine and tequila. 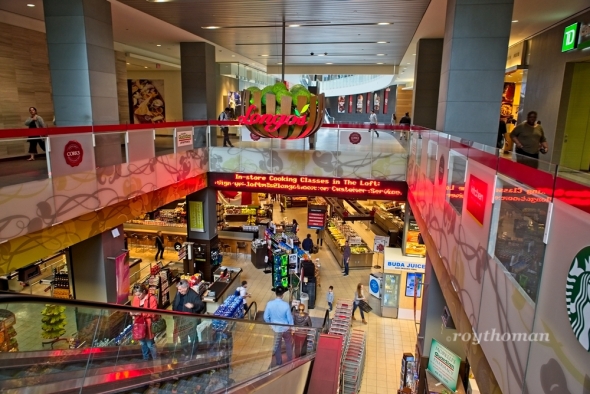 Much more to see and do in my next posts on visiting Toronto.