Tabgha Church of the Multiplication

Tabgha, Church of the Multiplication on the Sea of Galilee in Israel. This is the place where Jesus preformed the miracle of the loaves and fish. He turned a few loves of bread and a few fish into many to feed thousands of hungry people. The rock under the alter is where Jesus stood to preform the miracle. It is also where Jesus appeared for the 4th time after his resurrection. He tells Peter to take care of his sheep. So I thought it would make a good post for Easter. Happy Easter!

Our Venice Cruise Chapter 17: The Sea of Galilee Israel

After our awesome tour of Nazareth, we had about an hour drive through the countryside of Israel to the Sea of Galilee. The northern end of Galilee is a very beautiful, lush green area. We drove through a lot of citrus groves. Our first stop was apparently closed. That was fine with me because we decided to have our lunch break and then come back later. I was getting hungry! We took a short drive to Saint Peter’s Restaurant.

St. Peter’s is a very interesting place. This area being a highlight of the Holy Land gets quite a few visitors. Most of these visitors, as we did, come in big tour buses. St. Peter’s is designed to accommodate many tour buses. I don’t remember exactly, but I think there were ten or so buses in the parking lot. You may be thinking that this could be a nightmare! It was actually pretty nice. Whoever set this up knew what they were doing. First, the dining room was huge! The tables were large family style tables. I think half of our bus was at my table. All of the people on all of the buses just dissolved into the room. The table was setup with small Middle Eastern/Mediterranean style appetizers/side dishes. Family style, pass the hummus please. In the name of efficiency, we had the option of one of four main dishes. 1. St. Peter’s fish, the house specialty. This is a whole grilled fish. 2. Fish filet, for those who don’t like their lunch staring back at them. 3. Grilled chicken breast for the less adventurous. And 4. Grilled kebab, a beef and lamb mixture. All was served with a side of potatoes. If that’s not enough, there was a huge salad bar with not just salad, but pita, hummus, and more of those Middle Eastern/Mediterranean veggies. I was tempted to try the St. Peter’s fish, being the house specialty, but I can’t pass up kebabs, so I ordered those. They were a great choice, they were very good, all of the food was very good. They must have a small army in the kitchen, the food came fast and hot. I’m pretty sure everyone got the correct order too.

After lunch we had some time to walk around and work off all of that food. I wasn’t hungry anymore. St. Peter’s is on the shoreline of the Sea of Galilee. What a beautiful area! Lots of people were taking their shoes off and wading into the sea. I picked up a few seashells, really small ones. The beautiful Golan Heights dominated the horizon in the distance. We were approximately 1 mile from the Green Line. The de facto border between Syria and Israel until the Six-Day War in 1967. After the war, the border was moved to the other side of the Golan Heights. When I was a kid, I remember hearing the Golan Heights mentioned a lot on the news. Now I was standing there looking at it. One of the things I love about traveling. After we were done sightseeing and digesting, we boarded the bus for our next stop.

The next stop on our Holy Land hit parade was the Capernaum archeological sight. I have said before that I enjoy visiting ancient places. I try to imagine what it must have been like living in this place. Capernaum was a fishing village that was first occupied in the second century BC, probably one of the oldest places that I have visited. Capernaum is called The Town of Jesus. It was the hometown of the apostle Matthew. The apostle Peter, who lived in a nearby town and Jesus from Nazareth moved to Capernaum. It was sort of a home base for the ministry work they were doing around Galilee. Jesus was teaching at the synagogue there as well. The large synagogue with the Roman style pillars, visible today, was built over the 1st century synagogue where Jesus taught. Archeologists have identified the house that Peter owned. In the 4th century a church was built over that sight. Then in the 5th century a larger octagon Byzantine church was built over that church. In 1990 a modern memorial and church was built over the sight. The memorial is raised above the sight with pillars. Inside there is a chapel where services are held. The floor in the center is made of glass to allow viewing of the remains of Peter’s house as well as the octagon church. It’s a very striking structure made of grey stone and glass. There seems to be some debate as to whether Jesus lived in the house with Paul, or somewhere else in the town. The town is on a hill overlooking the sea of Galilee. There is a great view across the sea to the Golan. Capernaum was a great place to visit.

We continued our journey to, Tabgha Church of the Loaves and Fish. The church of today is a rendering of the Byzantine era church that was destroyed. The mosaics on the floor are the original Byzantine mosaics. This is the sight where Jesus performed the miracle of the feeding of the multitudes. He took a few loaves of bread and a few fish and multiplied them to feed 5,000 people. The exposed rock under the alter is believed to be the rock Jesus stood on to perform the miracle. This area is also the sight of his fourth appearance after his resurrection.

Continuing up the mountain we arrive at the Beatitude Monastery. Known as the sight of the Sermon on the Mount. Many familiar quotes come from the Sermon on the Mount, “Blessed are the meek”, “You are the salt of the earth”, “Seek and ye shall find” and The lords Prayer, just to name a few. The church and grounds are beautiful. There are large palm trees and colorful bougainvillea. Ring neck parrots are calling back and forth, flying everywhere. The view of the sea of Galilee is amazing! If I was going to give an important sermon, I would want a place like this.

Traveling south to the southern end of the Sea of Galilee. Where the Jordan River exits the Sea of Galilee is the Yardenit Baptismal Sight. Christians come here to be baptized in the waters of the Jordon River. The sight where John the Baptist baptized Jesus is on the Jordan River but farther south. I didn’t get formally baptized here but I did splash some Jordan River water on me. I brought some Jordan River water home with me. I really enjoyed my trip to Galilee! Mrs. Brumgard my Sunday School teacher would be proud. With a blazing orange sunset to put an exclamation point on a fantastic day of exploration and learning, we boarded our bus for the long drive back to the Port of Haifa and our ship.

The good thing about cruising is that you get to see a wide variety of places. Sometimes you don’t have a huge amount of time in each port. This can leave you wanting more. This would be a good place to plan another trip. Spending two days in Israel was amazing! We were able to pack a lot into our two days. We had a great time in Israel!

On our second day in Israel, Robbie and I went on separate shore excursions. Robbie wanted to see the Dead Sea. Most of the group picked the Dead Sea, Masada excursion. She had fun floating in the Dead Sea. She took a steep cable car ride up to Masada to see the ancient ruins of King Herod’s Palace. These photos are from Masada overlooking the Dead Sea. 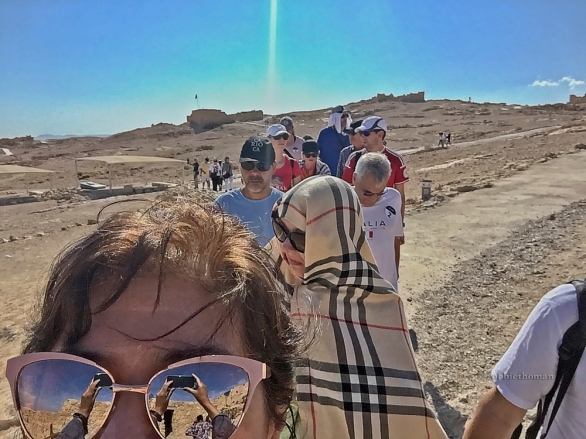 When I was a kid my Grandma and Grandpa would take my brother and me to church on Sundays. In my Sunday school classes I heard all of the stories about Jesus. Most of these wonderful stories took place in Galilee. So I have always been fascinated with Galilee and the Sea of Galilee because of my childhood Sunday school classes. So I signed up for the Sea of Galilee shore excursion. I was joined by Marcia and her husband Jack from our group.

This excursion was jam packed full of historical locations. The first stop was Nazareth, the hometown of Joseph, Mary and Jesus. In Nazareth we encountered a detour, our bus ended up in a part of Nazareth that was not designed for large tour buses. The roads were narrow and the turns were tight. There were parked cars everywhere. We needed to back up and turn around, twice! Our bus driver did an amazing job navigating the narrow streets. We made it to the Basilica of the Annunciation without incident.

The Basilica of the Annunciation is a large, beautiful Catholic church. It’s built over the remains of ancient Nazareth. The Virgin Mary’s home town. The town where the angel Gabriel appeared to Mary and announced that she would bear Jesus, the son of God. Excavations of the old town are visible under the basilica. We entered the church on the lower level. The lower level contains the Grotto of the Annunciation, the childhood home of Mary. On the upper level there is a traditional sanctuary with pews, an alter, and a huge pipe organ. 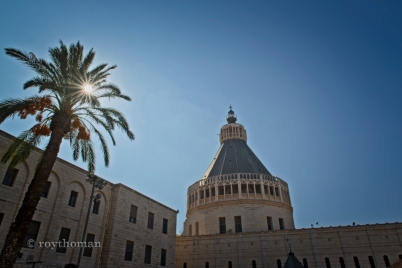 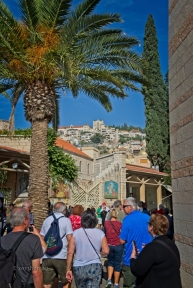 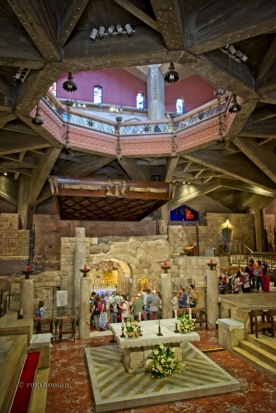 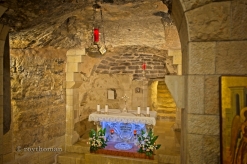 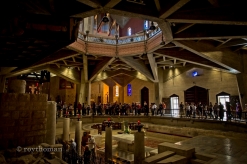 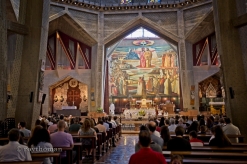 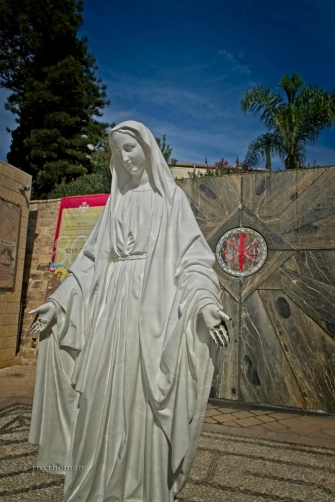 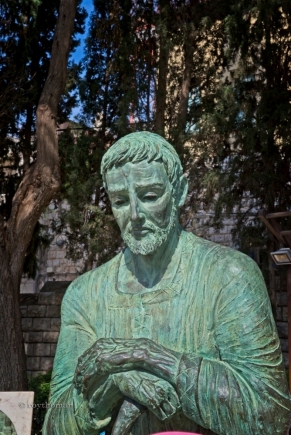 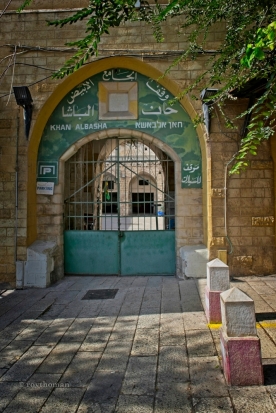 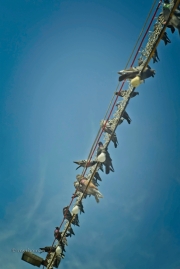