My wife Robbie and I had a wonderful time in Toronto. But it was time to start the second part of our journey, Niagara Falls. We woke up to a rainy Canadian morning. Niagara Falls is an easy drive from Toronto. We walked down the street, in the rain, to pick up our cute little red Canadian rental car. After stopping at the hotel to pick up our bags, we were off to Niagara. We had been driving a while on the QEW and we were getting hungry. I spotted a nice looking restaurant, The Lake House, right on Lake Ontario. I got off at the next exit to find my way to the restaurant. Driving along Lake Ontario we spotted this old rusty ghost ship, aground in a little cove. This was something that needed to be explored, even in the rain. But not until after lunch. The ghost ship could wait. The Lake House was a great restaurant with an awesome view of Lake Ontario. After a really nice lunch we stopped by this amazing old ship. It was still raining, but not very hard, I was able to get a few photos without getting too wet. 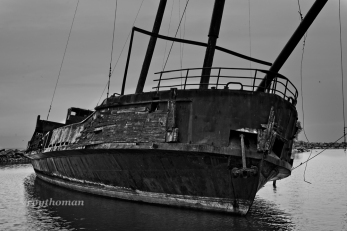 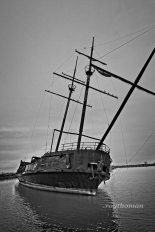 The old ship has a rather long sorted past. It started life in 1914 as a ferry and then a cargo ship on the St. Lawrence river. In 1991 it was converted into a replica of one of three sailing ships that explored the St. Lawrence in the mid 1500s. At some point it was turned into a restaurant and casino that went bust. Someone thought it would make a good floating restaurant in the Niagara area. Apparently on its way to Niagara, the project ran out of funds and it was abandoned in its current location. At some point some ingenious individuals thought it would be a good idea to sneak aboard and have a BBQ. They proceeded to set the whole ship ablaze. The original ship was steel but the facade of the replica was wooden, it all burned. So now this old ship sits aground in this Lake Ontario cove. A curiosity to all who travel the QEW on the way to Niagara.