After a really nice lunch at La Bodeguita del Medio, we continued on a walking tour of Old Havana. There was some repetition of our tour from yesterday, but it was mostly things we didn’t mind seeing again anyway. Also this tour took a different route and we saw lots of different things along the way, as well as getting a different perspective. For instance, we got off of the bus near Plaza de Armas and walked through Plaza de la Catedral on the way to and from the Bodeguita.

One of the things we saw along the way was La Bodega de Barrio, a local ration store. Basic staples like rice, sugar, salt, soap and many other necessities have been rationed in Cuba since the 1960s. In order to understand rationing you need to know a little about Cuban currency. There are two types of currency in Cuba. The Cuban convertible peso or CUC and the Cuban peso or CUP. Cuban state workers are paid mostly in Cuban pesos or CUPs, they also receive a few Cuban convertible pesos or CUCs. At the risk of oversimplifying, if Cubans are paid by the government or spend money at a government business, Cubans use CUPs. If Cubans are paid or spend money at a non government business, Cubans use CUCs. You can probably guess which one is worth more. When people from other countries visit Cuba, they exchange their currency for CUCs. Visitors are only allowed to use CUCs. When you exchange U.S. dollars for CUCs there is an added surcharge of 10%, lucky us. Some people like to get Euros and exchange the Euro for CUCs without the surcharge. Getting Euros before your trip also has a cost, I figured it was close to a wash and we didn’t need that much anyway, so we just exchanged U.S. for CUCs and paid the extra 10%.

Getting back to Cuban rationing and the Bodega. The Cuban government gives each family a ration coupon book called a Libreta de Abastecimiento. The amount of rations each family is allowed depends on the size, age, and gender of each family. There is a Bodega for each neighborhood, they must use that Bodega. Cubans take the coupons to the Bodega, the coupon determines how much of each commodity they can buy with CUPs. There are stores where Cubans may buy things over and above the rations. Unfortunately, they need to pay for those items with CUCs and CUCs are hard to get for a lot of Cubans.

You maybe wondering about the La Bodeguita the restaurant and the Bodega the store. The Bodeguita started out as a store many years ago, long before rationing. They started making a few dishes to sell in the store. Eventually it evolved from a store, into a restaurant. Hence La Bodeguita or the little store.

Update on Cuba: Due to the recent ban on travel to Cuba, along with tightening of the U.S. embargo, as of  May 2019, rationing in Cuba has been increased. Cubans now need to make due with even less than before! Also the situation in Venezuela is having an effect. Venezuela has stopped sending aid to Cuba. The relationship between Cuba and Venezuela is said to be the reason for the U.S. travel ban. Although even before things in Venezuela became an issue, the U.S. started restricting travel to Cuba. 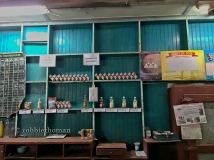 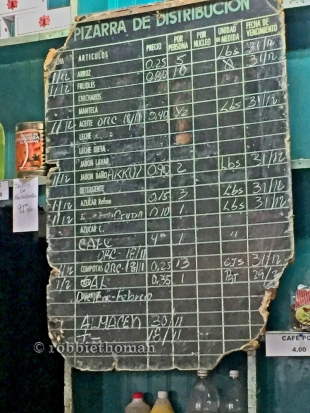